The University of the Philippines Visayas Tacloban College recently hosted the 5th International conference last November 6-7, 2019, at Summit Hotel, Tacloban City, concerning the Fisheries and Aquatic Industries. Several keynote speakers were invited from the neighboring countries in Asia and Bangladesh to talk on diverse scholarly issues that would bring together their shared experiences and research results.

These interdisciplinary studies and findings will be presented to other researchers, educators, students, and, practitioners on recent innovations and concerns as well as the challenges encountered and the solutions adopted in their respective fields. The research findings will serve as a means to understand the various issues and increase public awareness in the fisheries and aquatic industries.

University of the Philippine Tacloban College did the honors for the ICFAS 2019 International Conference with the support of the Office of the International Linkages of the UP System and in partnership with the Bureau of Fisheries and Aquatic Resources Regional Office 8.

Learn more About the Conference. 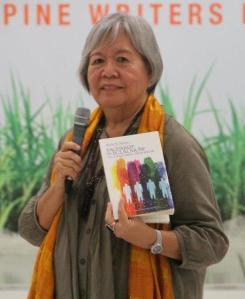 Merlie M. Alunan, Professor Emeritus of theUniversity of Philippines Visayas, is indefatigable even after retirement from service as Professor in UP Visayas Tacloban College. Prof. Alunan has recently won for her book Susumaton: Oral Narratives of Leyte (Ateneo de Manila University Press) the National Book Award 2017 for Anthology in Waray from the National Book Development Board and Manila Critics’Circle.  Previous to that, she received the  2016   National Book Award for Translation for Sa Atong Dila, Introduction to Visayan Literature, University of the Philippines Press, 2015.

Ma’amMerlie, as she is fondly called by her students or Mom Merlie to many writers she mentored, continues to write poetry in English and Cebuano for which she has six times garnered the prestigious Carlos Palanca Awards.  She has also received the significant literary awards in the Philippines given by other reputable groups such as the Free Press Literary Award for Poetry and the UMPIL(Unyon ng Mga Manunulat sa Pilipinas) Gawad Balagtas.

International recognition for her work includes her being the first Filipino to receive the Sunthorn Phu Award for ASEAN Poets in 2013 by the Kingdom of Thailand.  Much earlier she received Honorable Mention of the Lillian Jerome Thornton Award.  She has served as Writer in Residence in the National  University of Singapore (2012) and as Distinguished Professor Lecturer of the Asian Universities Network (AUN), University of Sains,  Penang, Malaysia (2000) She also traveled to India on invitation of the Sahitya Akademi of the India Ministry of Culture to read her poetry in seven major cities as the Ananda Coomaraswamy Fellow for Literature in 2012.  Her own home city of Tacloban has honored her with the SANGYAW Achievement Award.

Prof.Alunan has received the UP Visayas  Chancellor’s Award for Creative Work1997.  The UP system endowed her with the CENTENNIAL MEDALLION for the publication of Amina Among the Angels and Fern Garden Women Writing in the South among the 100-books target of the UP Press in honor of the Centennial of Philippine Independence and by the Government of the Philippines through the National Commission of the Philippines with the Ani ng Dangal.

She has significantly contributed to the growth of Philippine literature with her involvement in creative writing workshops, particularly in the Visayas and Mindanao,  In other academic home base, she co-founded the UPV Creative Writing program. The revival of writing in the Waray language may be credited to the workshops she organized in the UPVTC. Her mentees are now in the forefront of literary education in the region.

Her recent poetry book Running with Ghosts (Ateneo de Naga University Press) has been launched in June this year.  Another book Tinalunay – Hinugpong ngaPanurat nga Winaray, an anthology of Waray poetry (University of the Philippines Press) will be launched soon. Both are current finalists to the National Book Awards.

Ma’am Merlie continues to grace cultural events, conducts seminars and reads poetry to young and old udiences in whatever season of her life.

The University of the Philippines Visayas Tacloban College conducts its 40th Graduation Exercises Monday June 27 at the Arts and Sciences Grounds.